Quality education is the key to sustainable development. This is why our company gives an opportunity to enthusiastic, determined and young students to gain the experience in context of realization development project either in the office or in the field. Adam was one of our volunteers, who got the chance to try it for himself, passionate sportsman with a huge enthusiasm for the development projects. 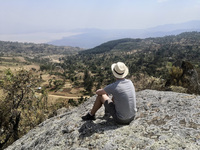 Adam, how did the idea of going to a developing country as a volunteer actually begin? What led you to this?

I talked several times with Jaromir (managing director of Holistic Solutions) about his job. From the beginning I did not understand properly, what the purpose of his job is, but the more I knew about that, the more I liked the idea of the projects which are implemented by the company. I was really surprised by the countries where they travel and the stories, I was told, were extremely interesting and funny at the same time.

Jaromir has little bit different view of the world and I think it is mainly because of what he does, in terms of going to Africa. Once, he mentioned the possibility of joining some of the volunteers (students) into these projects. Eventually, I got this opportunity, probably because of my passion for the cause (laugh). I was really interested by the country itself, by the people, culture etc. From this journey, I expected deeper self-knowledge, awareness of how people live in Africa. I told myself I could be beneficial in interesting project, if I would have gone, and I was really into every single activity right from the start to help my colleagues.

You were for the first time in Africa and in Ethiopia. Was it exactly how you imagined or something surprised you?

I was surprised by 'buna'. It means coffee in amharic language. I drunk it every single day and it was really cheap, mostly it cost 10 birr which is around 5 Czech crowns. For this really low price we got the real Ethiopian coffee, that was unbelievable.

I knew from the beginning I should not drink the tap water, but I did not expect small black pieces of dirt coming out from the sink faucet. On the other hand, sometimes the tap water was perfectly fine and taking a shower was no problem. Ethiopia is the country of extremes. This saying confirms the conditions of the local roads. If someone would tell me before the departure, that Ethiopia has the second highest rate of road deaths on the world, I would probably did not go there at all (laugh).

Then, I was really surprised how many kids we were able to make happy. Just passing by in the car by the smaller or bigger group of kids and every single kid smiled at us.

I liked the fact, that everything was 'chegr jerlam' which means ,no problem' in Ethiopia. Everything is fine. Once, our driver picked us up with a long delay, but eventually he was the one who was little bit angry, because we were in rush and pushed him immediately to hit the road, while he wanted to enjoy his breakfast. When it comes to food - the portions were huge. Ethiopians eat approximately twice a day. This is incomparable with Europeans because we eat more frequently, even six times a day.

What was your job description within the projects?

My work within the projects was very various. As a man, I mostly helped with carrying really heavy stuffs etc. Then I quite often flew with drone. Jaromir explained me how to use it and now I dare to say we became friends with the drone quite fast and I was able to operate with it. I had to trust myself and also my inner feeling I am not gonna crash the drone and to not cause any damage. Thanks God I managed to take really nice pictures and also shoot hilarious videos from the surrounding projects areas.

Using the Ethiopian mobile data I was able to mark places we visited and add the photos to them. With our team we enhanced the spaces of the permaculture center of the Mendel University in Brno, which is located close to the city of Arba Minch. It is a huge space where a lot of kinds of fruits, vegetables and herbs are grown. Apart from that, there is exemplary pond and training center for local farmer and schools. In this permaculture center, there are even small cottages in which it was possible to sleep and I tried it for few days, of course.

I also wrote continuously various report in English, from personal meetings we had during the time in Ethiopia. Every evening we gathered together and brainstormed over plans for further days and ideas what we could improve. I always tried to contribute to this discussion with my own ideas.

What was the activity you enjoyed the most?

I felt the best in Awassa. I really enjoyed playing tennis in there, which we could play in our spare time. I also really liked flying with the drone, nice accommodation and pleasant atmosphere around the lake. The meetings with our Ethiopian colleagues were also very nice and beneficial. During the time we visited city parks and I really appreciate the way how my colleagues think about this phenomenon and propose possible solutions. I was fascinated by the approach from one of the Ethiopian colleagues in the way how she was determined to do something for making this parks better places - get rid of the waste in parks, plant trees and make them accessible for local people.

Moringa oleifera and Moringa stenopetala are abundant in Ethiopia, fast-growing evergreen trees, sometimes called "green gold" due to their extraordinary nutritional and medicinal properties. Ethiopians use it as a cheap, nutritious and affordable food, with perhaps every family having at least two moringa trees near their home, and on the farms it usually grows at least twice as much (often, the moringa tree is planted by the family at the birth of a son). Holistic Solutions, together with Mendel University in Brno, has long been engaged in research, support and improvement of the moringa value chain and, of course, fair trade purchase of this raw material, which the company then sells under the TIBIBIRI brand in the form of various products in the Czech Republic and foreign markets.

What did you learn about moringa? Did you work on tasks related to moringa?

I knew quite a lot about moringa before I went to Ethiopia. I use moringa tablets and moringa oil at home and I can only recommend it. I did not exactly know how the tree looks like, how the oil is made and how the powder gets out of the leaves. In Ethiopia, I took photos of the production area and I had the opportunity to see the process of production of moringa, where it is stored and who takes care of it. All this in real time.

What did you find out about the problems we deal with in Ethiopia?

For example, since the high school I always heard about the 'erosion' but in Ethiopia, I had the chance for the first time in my life to see the consequences of this huge natural disaster. I did not know the soil conditions could be that bad. I would rank this as one of the biggest problems of the landscape in Ethiopia. As well as a large amount of waste in the places where it definitely does not belong. On the shore of the lake Awassa, there is a plastic bottle on perhaps every other meter. This was really sad.

Has there been a situation when you did not feel comfortable in Ethiopia?

Of course, yes, but it was nothing terrible. I had some intestinal problems, but I expected that. I took a rest for one day and I quickly got cured to be ready for another day. Mentally, everything was fine. Sometimes I felt homesick, I missed my friends, but that is the way it is. I was always involved in the activities, so there was no time to think what's going on in Brno, my hometown.

Adam, you are a passionate tennis player. Did you play in Ethiopia? Is tennis a common sport in Ethiopia?

Yes, we had few opportunities when we could play in the spare time. We always played early in the morning, right after the breakfast, when the temperature was not so high, and it was perfect start of the day. Then, you have plenty of energy for upcoming activities. In Awassa, we even played with local kids. In Addis Ababa, we challenged one of the best tennis players in Ethiopia - Melcamu. We also found out the general conditions for sport in Ethiopia and personally me, I really would like to be involved in project, supporting sport in Ethiopia, in the future.

Is there a place in Ethiopia that has enchanted you?

Definitely Lodge in Dorze, that is for sure. This place is located approximately 2600 meters above the sea, and we visited this place after we checked out nearby orchard. Before dark, I managed to enjoy the view on surrounding landscape. That evening, we had a great dinner full of vegetables and fruits. My colleagues came up with an idea to pull out the mattress so we could sleep under the stars. Honestly, this was probably was one of the best nights in my life. During falling asleep, there was a complete silence and beautiful view on the sky full of stars. And getting up early in the morning with such a view was breathtaking. Just like the morning breakfast. It was like from another planet.

Now that you evaluate your trip to Ethiopia over time, would you go back with our team again, or was that enough for you?

I was full of expectations which were eventually fulfilled. I went with a bunch of people I basically didn't know, but there was nothing to worry about in this respect, we were a good group, I think. Everyone was really friendly to me, answered my inquisitive questions and that there were many of them. Everyone had an overview in something different and I tried to take good advice from everyone. I definitely improved my English as I used it on a daily basis.

Ethiopia as a country really surprised me in a positive way. Especially at higher altitudes, it was beautiful. The food also surprised me, it was very good. Ethiopia was great. I am really grateful for this opportunity, but I would like to get to know new countries, and, for example, Zambia would also be very attractive to me. 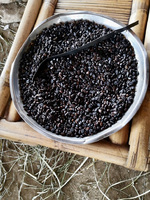 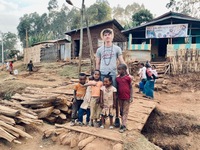 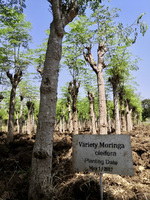 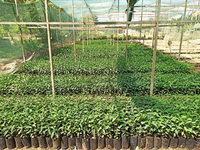